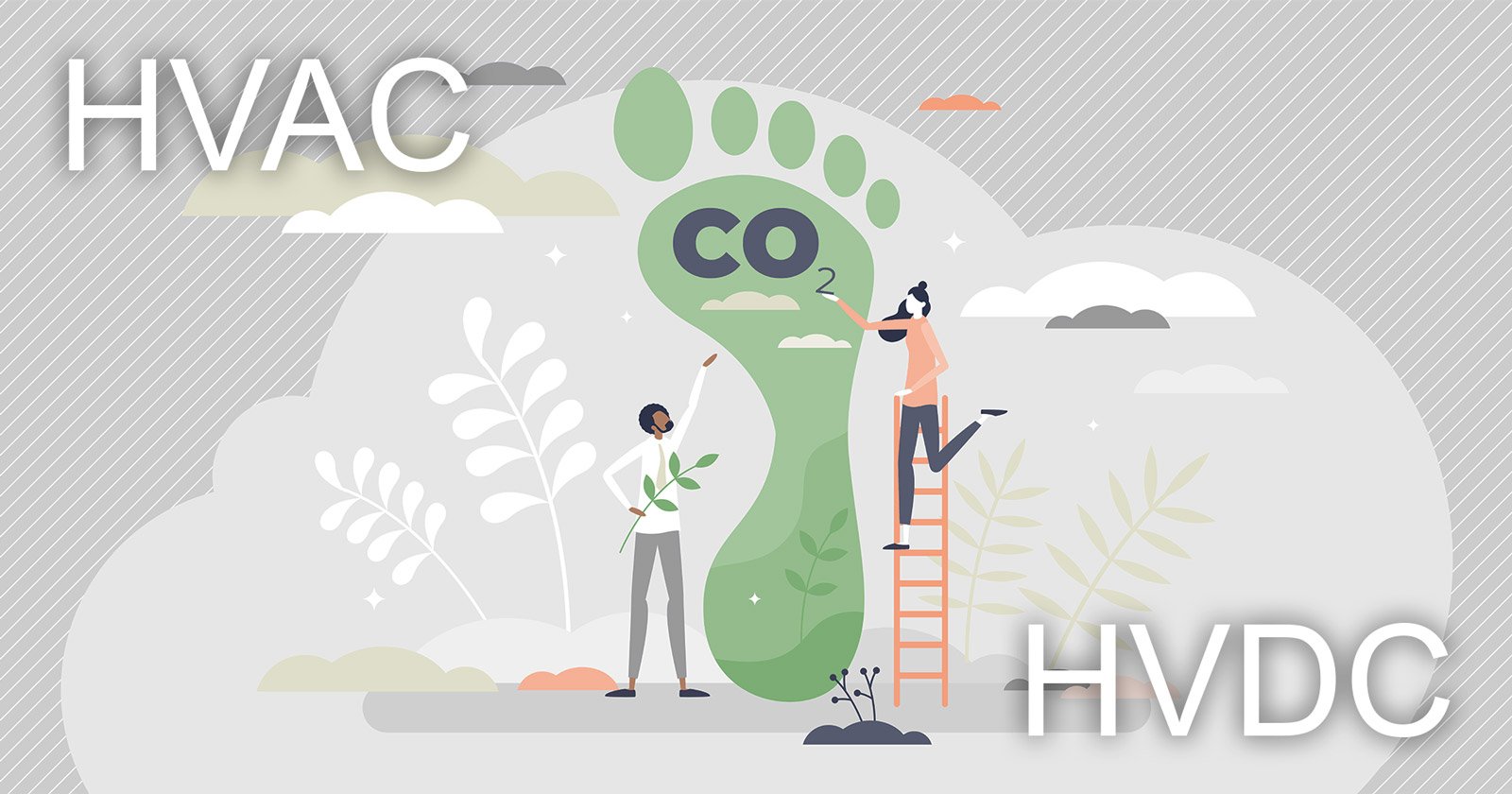 Most of us believe renewable energy is good for the planet and good for people, right? It’s the fastest-growing source of energy in the world so why wouldn’t we. We can use it to benefit the climate, the environment, the economy and communities.

The advantages over the devastating impacts of fossil fuels are undeniable: from less air and water pollution, less wildlife and habitat loss, to no or lower greenhouse gas emissions.

Are we really reducing CO2 emissions as well as we could be?

Let’s have a look at the best form of electricity transmission.

When power must be transmitted over long distances, High Voltage Alternating Current (HVAC) overhead lines (OHL) have long been the prevailing technology. You know the type, steel lattice towers, supporting multiple strands of wire. The costs and performance of buried HVAC cables simply made them unattractive as an alternative.

High Voltage Direct Current (HVDC) is bringing about a paradigm shift in thinking. Whereas buried cables are not suitable for long-distance HVAC transmissions, the different behaviour of HVDC fundamentally changes this.

A few reasons why underground HVDC cables have a better environmental profile than overhead HVAC lines include:

Increased environmental pressure on overhead transmission lines is both raising total costs and increasing the risk of material project delays. HVDC technology has made underground transmission options technically feasible and economically viable. This is especially so if the new grid investment is driven by environmental and security of supply issues.

The conventional view that an underground transmission line will cost 5 – 15 times its overhead counterpart must be revised. Depending on local conditions and when considering socioeconomic and environmental impacts, it is realistic that the costs for an underground HVDC line are equal to that of traditional overhead lines.

So, what does transmission have to do with CO2 emissions?

In simple terms, on a 350 MW overhead HVAC transmission (50 percent utilisation), losses amount to around 5 percent. On an equivalent underground HVDC transmission there are minimal losses. What this means is the network operator has 76,650 MWh more electricity to sell to retailers (and consumers) each year with a HVDC solution.

The overall electrical losses1 can be translated into 45,990 tons of CO2 emitted per year.

To put that into context, a loaded Boeing 747-400 (333 passengers) produces around 180kg CO2 per hour. To produce an equivalent 45,990 tons of CO2, requires almost 255,500 hours of flying or 29 years non-stop. Hmmmmm, this knowledge alone should result in serious consideration of HVDC.

Losses are a big deal with HVAC. Due to the very nature and location of most renewable energy sources, HVAC is often impossible or too expensive to operate due to unacceptable transmission losses compared to the minimal losses of HVDC.

In addition, HVDC is inherently more suitable for very large-scale and long-distance transmission than HVAC. This is because it requires a distinctly smaller footprint for – either 'invisible', with long underground or submarine cables, or with overhead lines having smaller footprints than HVAC lines.

The material intensity of an HVAC OHL is higher than a HVDC cable. The statistical material use per meter of transmission is compared in the following table.

The material used in the HVDC cable has only 17.6 percent the environmental impact of the HVAC OHL.

Comparison of material use per meter.

So why isn’t underground HVDC being considered?

Well, that’s the million-dollar questions. I guess because all our network owners only know how to build overhead transmission networks and there is no motivation or incentive to change. Or maybe they have never stopped to consider why we are transitioning to renewable energy in the first place.

Yep, I’m with you, I would have thought the reduced C02 emissions alone would have done the trick, the material use just rubs salt into the wounds.

HVDC is an established technology that has been in use for more than 50 years. During the first 30 years, it was more of a niche technology, with a limited number of projects per year. With the changes in demands due to evolving environmental needs, HVDC has become a common tool in the design of future global transmission grids. Key factors for this have been the recent developments within HVDC, with the step-up in voltage to 800 kV as well as the VSC technology.

By using HVDC, transmission grids can be optimised and controlled to support the introduction of renewable generation into the grid. Far more efficiently and in a more environmentally sensitive way than HVAC ever will.

It's seriously time to rethink our network plans.