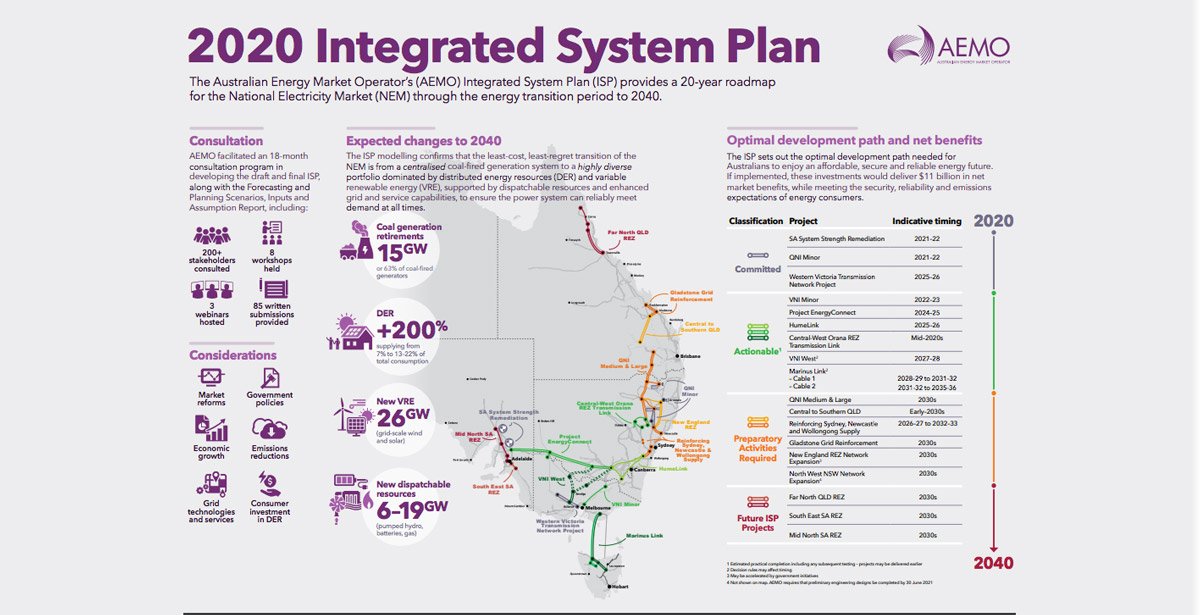 The 2020 ISP provides an actionable roadmap for eastern Australia’s power system. The ISP draws on extensive stakeholder engagement and internal and external industry and power system expertise to develop a blueprint that maximises consumer benefits through a transition period of great complexity and uncertainty.

The ISP is a whole-of-system plan that efficiently achieves power system needs through that transformational period, in the long-term interests of the consumers of electricity. It serves the regulatory purpose of identifying actionable and future ISP projects, as well as the broader purposes of informing market participants, investors, policy decision makers and consumers.

The ISP was released on 30 July 2020 and can be downloaded using the links below.

The first Integrated System Plan (ISP) was prepared by AEMO and endorsed by the COAG Energy Council in 2018. It has since guided governments, industry and consumers on investments needed for an affordable, secure and reliable energy future, while meeting prescribed emissions trajectories, and triggered the processes for actionable ISP projects.

With the ISP to be updated every two years, AEMO is pleased to present the 2020 ISP, which responds to the latest technology, economic, policy and system developments.

The ISP identifies investment choices and recommends essential actions to optimise consumer benefits as Australia experiences what is acknowledged to be the world’s fastest energy transition. That is, it aims to minimise costs and the risk of events that can adversely impact future power costs and consumer prices, while also maintaining the reliability and security of the power system.

Provided that the transmission investments are timely and kept at an efficient level, the combined supply and network investments proposed in the ISP are expected to deliver $11 billion in net benefits to the National Electricity Market (NEM). As regulated network investments typically have long lead times, the ISP provides clear signposts for decision making as the future unfolds.

In parallel with the ISP, the Energy Security Board (ESB) and market bodies are exploring essential reforms to attract investment and optimise bidding of supply and demand based energy resources.Without reforms that can enable these market-based investments, the ISP benefits will not be realised in full.

The ISP serves its essential national purpose because it draws on constructive and critical input from all parties. AEMO consulted widely over the past 18 months in preparing this ISP, leading to important improvements from both the 2018 ISP and the Draft 2020 ISP.

What does this mean for Western Victoria?

The Victorian Government will develop a Renewable Energy Zone Development Plan to ensure that investments are coordinated, timely and deliver positive outcomes for Victoria and local communities.

The first step in the REZ Development Plan is the release of a Directions Paper, which identifies potential projects for investment that could unlock the potential of our REZs.

The REZ Development Plan will be backed by a $540 million REZ Fund, which will be administered by a new body known as VicGrid.

VicGrid will be tasked with the overarching planning and development of Victorian REZs. VicGrid will actively engage with regional communities to ensure appropriate and beneficial development in each REZ. The form and function of VicGrid will be determined following feedback from industry and stakeholders.

The long term plan for Renewable Energy Zones (REZs) in Victoria’s West extends well beyond Horsham to east of Ballarat. The proposed Bulgana to Sydenham line will not be an end to end transmission. The future of this REZ will contain a host of developments along that route, all containing:

All these will occupy agricultural and farming land with the infrastructure being developed by private enterprise. So regardless of how hard we fight to stop overhead transmission, farming communities will have a new fight to stop their primary land being taken over by renewable energy projects. A UK company has already started reaching out to land holders regarding solar farm development.

The reason the lines 'have to go overhead' in government view, is that these future energy infrastructure projects can easily connect to the grid. If cables are underground, it makes this a logistical nightmare as noone knows where these renewable farms will be and they cannot pre-plan connection junctions. I personally think it kills any fight for underground, at least in the REZ zones.

The Victorian Government are committed to reaching Renewable Energy targets by 2025 and in doing so, they are fast-tracking infrastructure projects to allow connection to the grid. This haste, has resulted in a lack of thorough planning about how REZs will be rolled out in the future. They need to stop, take a breath and ensure what they do now with the WVTNP is right for the environment and right for communities (not right for their targets and network operators shareholders).